I need to update my Artstation and blog more often. This is my current work in progress. It's a digital double of a friend of mine based on a 3D scan. Any feedback I can get from the community would be great. I'm already aware of the fact that the eyelids don't hug the eyeball very well. And they're looking really reddish so I have to dial that back a little. Next phase is hair.

I also have a question, just in case anyone with experience reads this: I have blend shapes for all his expressions as well as separate scans which have all been Wrap3'd with the same identical basemesh. Is there a way to load them in to ZBrush as layers of this original ZTool? Thanks for looking at my work!

P.S. the jacket is a placeholder I got from 3DScanStore. I didn't make it and don't claim credit for it. We'll be scanning my friend's body/outfit at a later time. 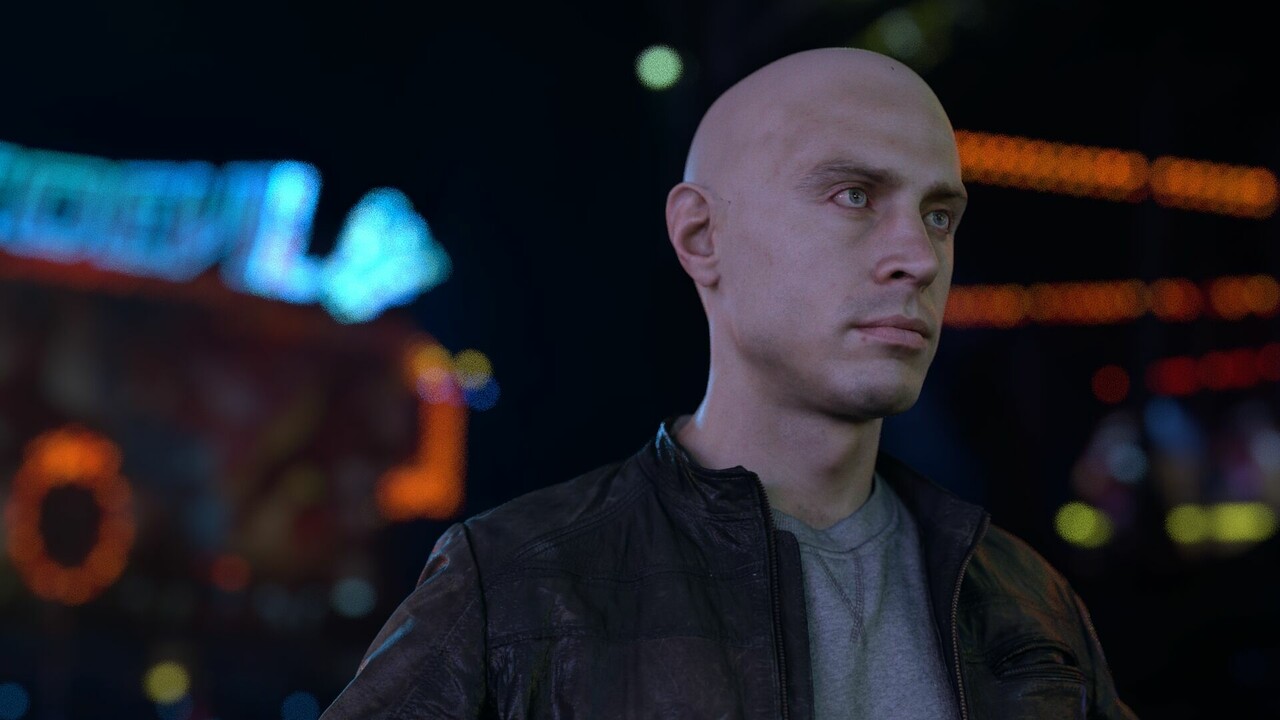 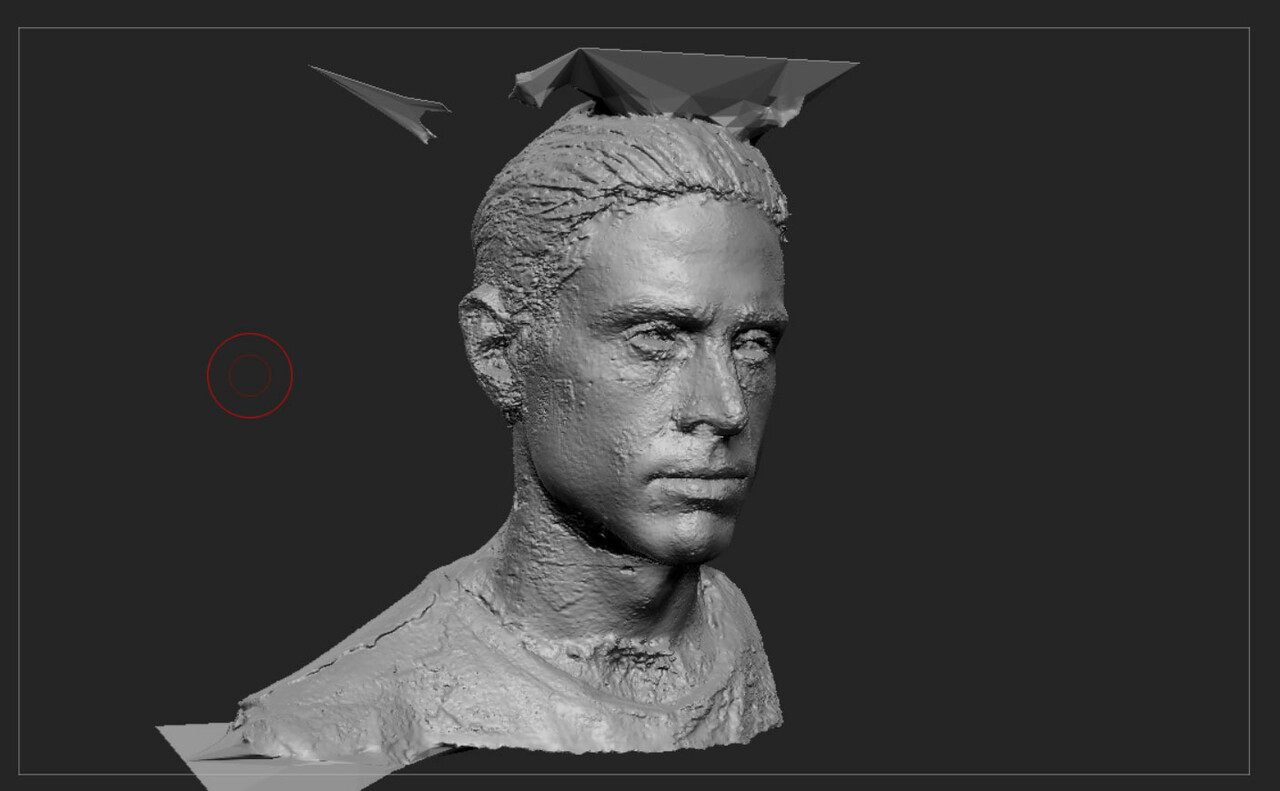 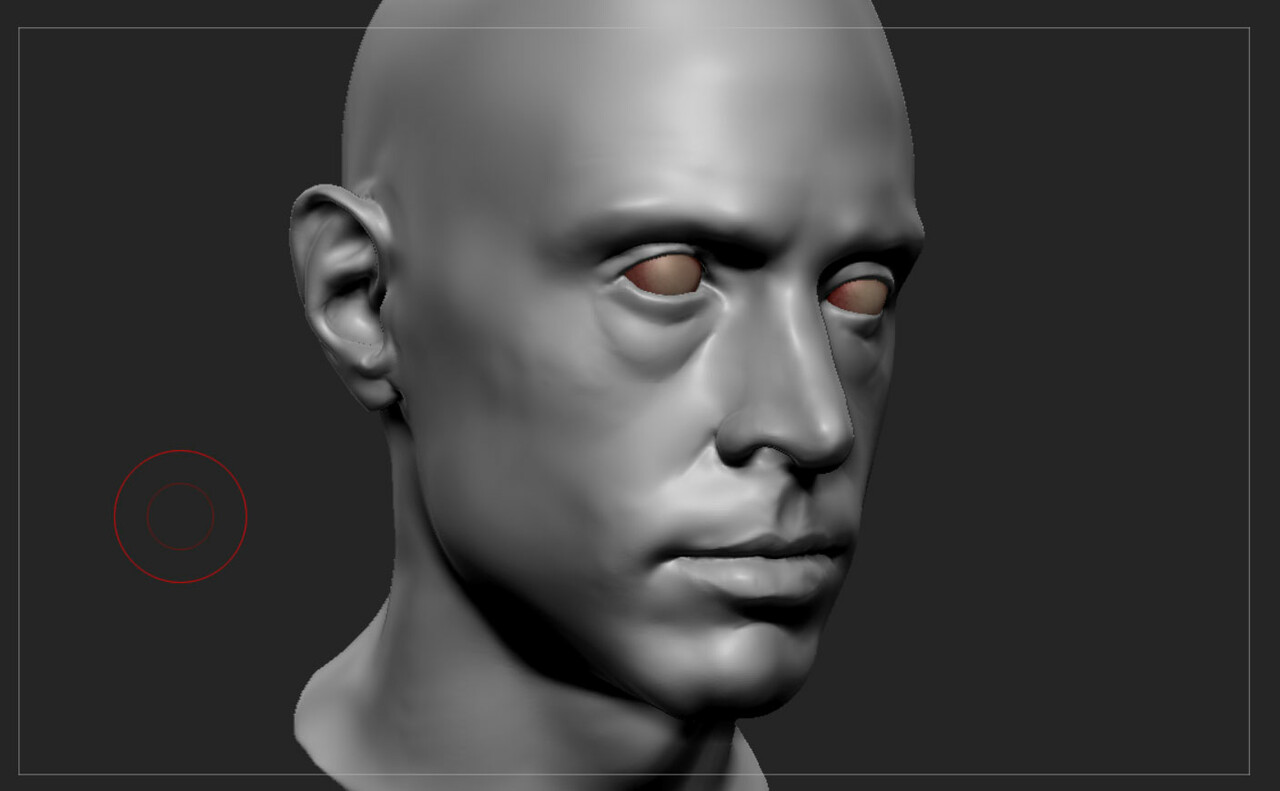 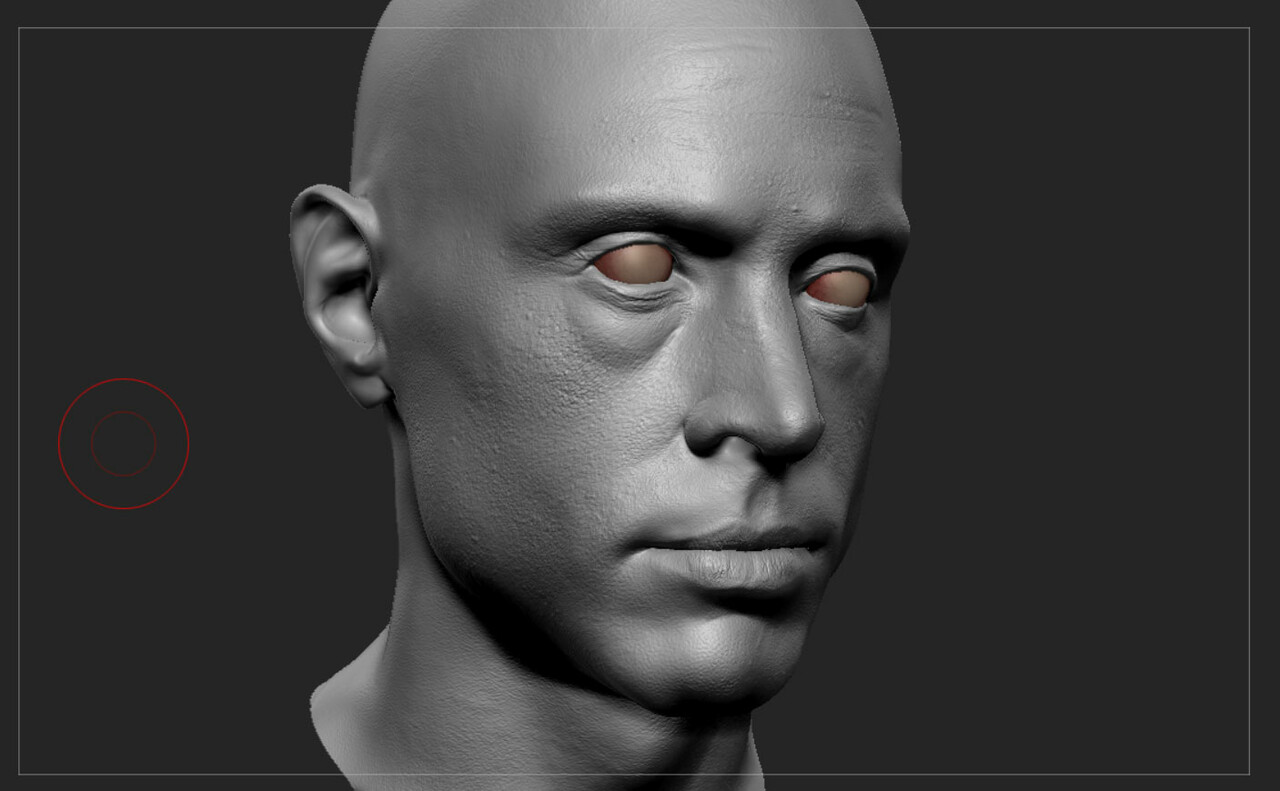 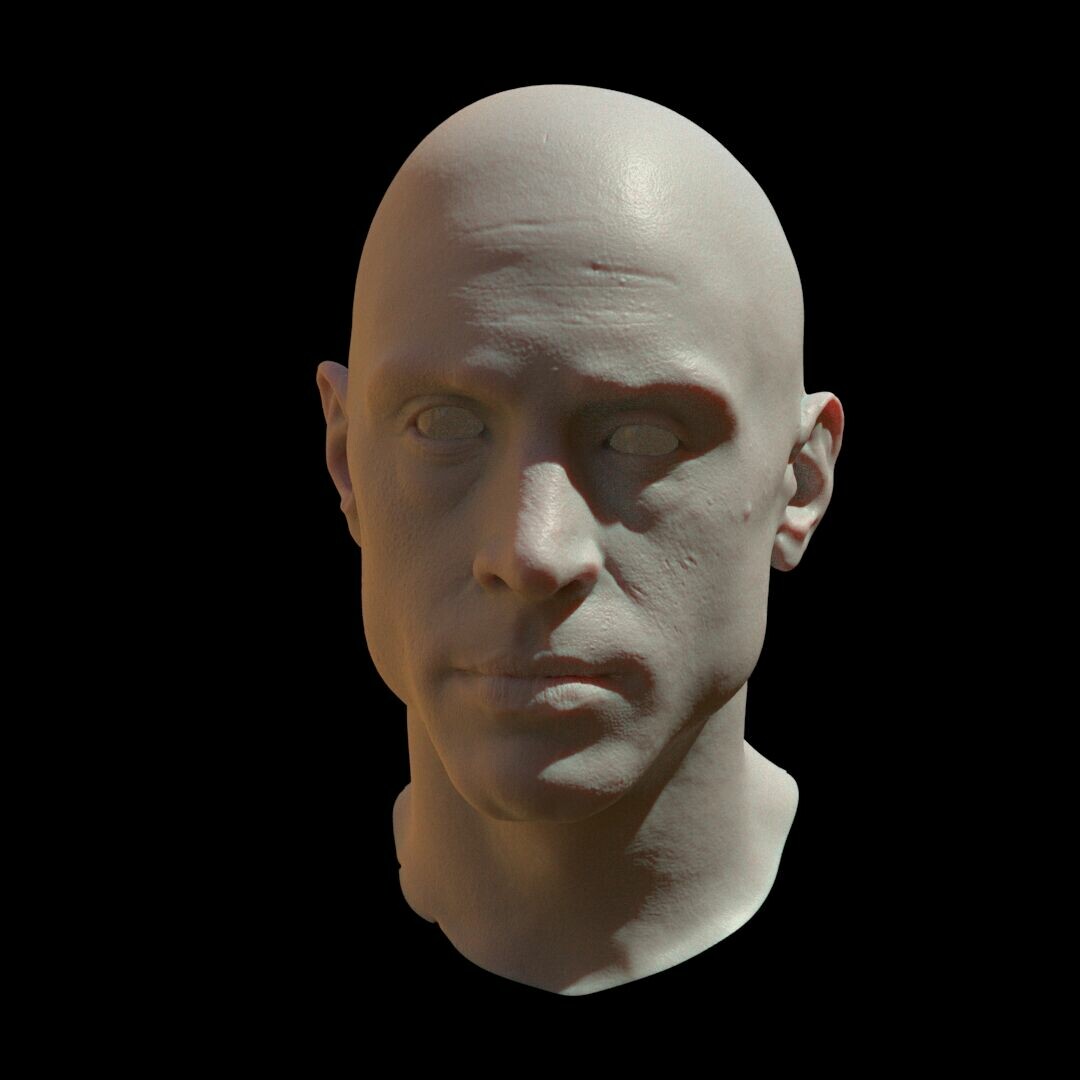 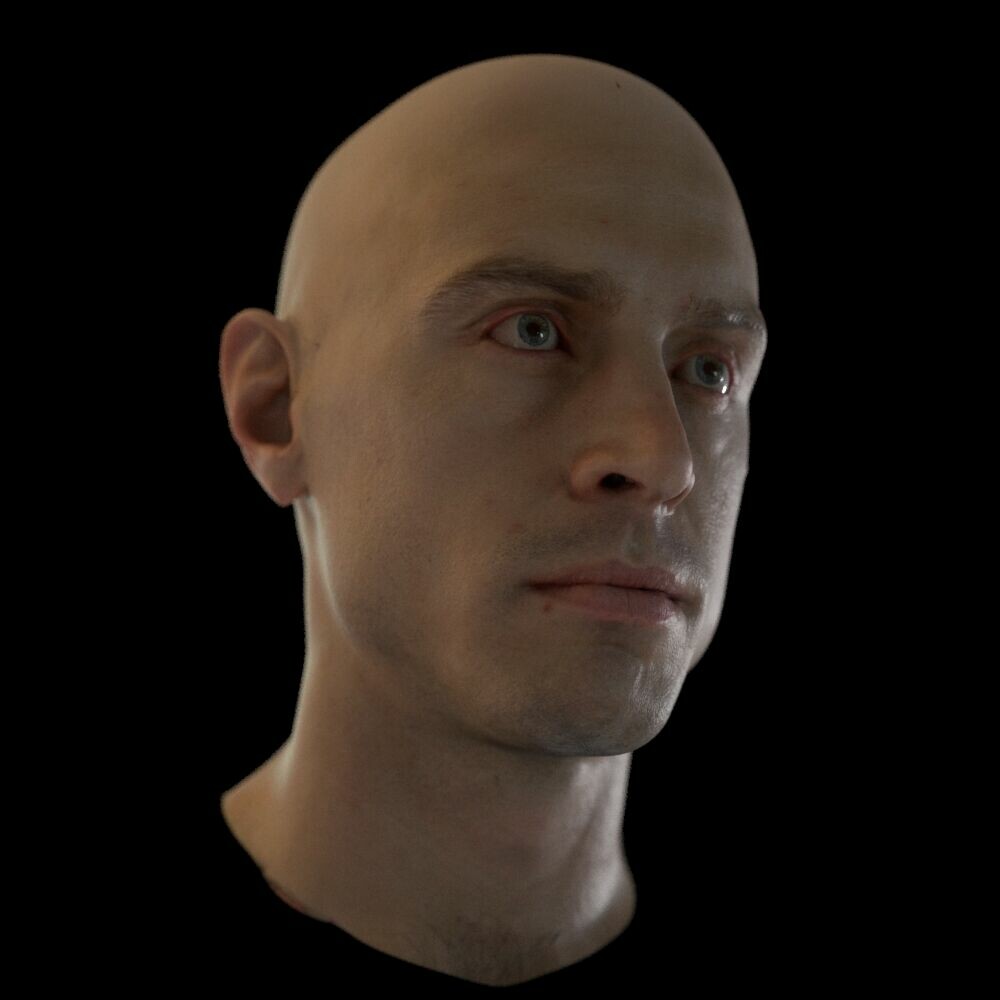 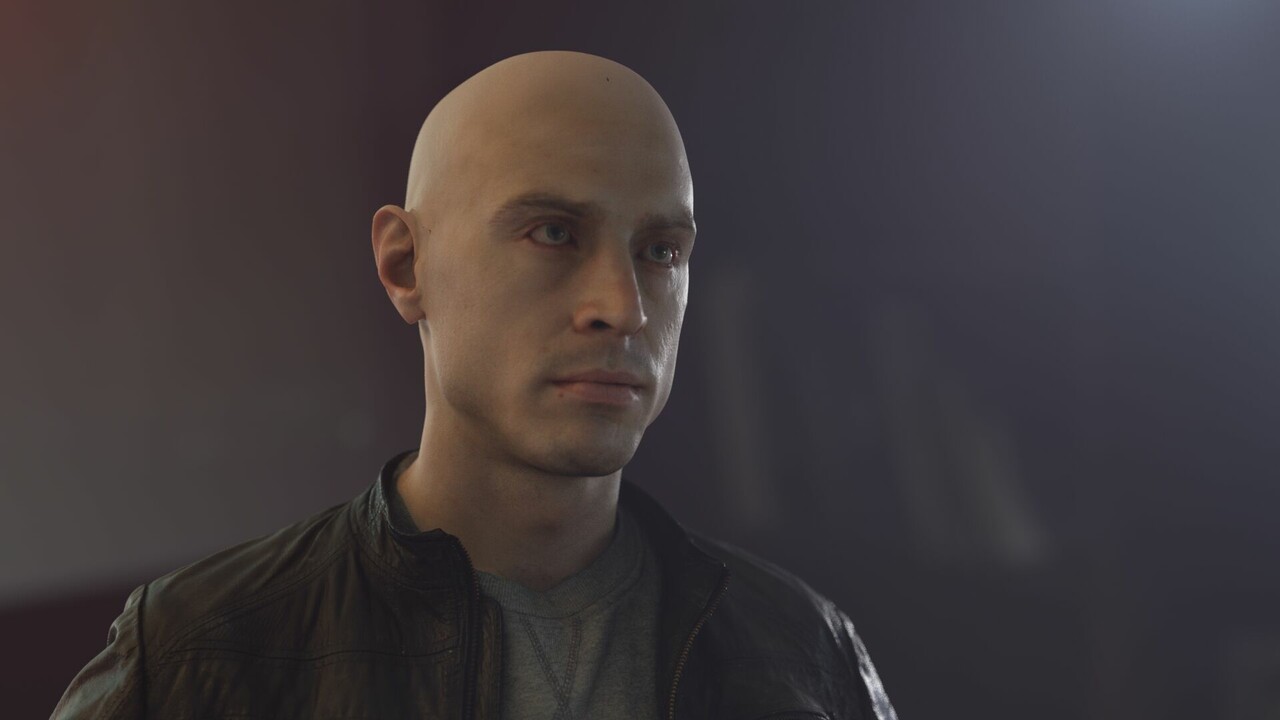 Why didn't anyone tell me about Mixamo?

I don't like automatic things but for a quick animation to give a character life on your portfolio, MIxamo is awesome. I can't believe I've never tried it out before.

For the past week or two, I've been working on a project. This is mostly R&D for myself. It's very heavily a work in progress, so I'm open to whatever comments and critiques you guys can give me. So far only the ZBrush sculpt itself is finalized. The skin diffuse color and the eyes are all quick temporary polypaints, just so I dont feel like I'm staring at a grey alien while I work on the displacement and specular. The model itself is based on scan data of a friend of mine that I had to clean up. The fine details are a mix of hand sculpting and displacement maps from Surface Mimic. I'm very happy with it so far, but I have a long way to go yet. This will be my first attempt at a stylish hair cut, so I'm excited about that.

Here's a dump of my WIP shots so far.

I decided to make the switch from Quixel to Substance Painter since I'm getting so into Designer lately. I honestly can't believe how I managed without painter. Years ago, when PBR first started becoming a thing that everyone really needs to know how to do, Quixel was an excellent way to get your brain around the concepts. And their libraries are top notch. But the Substance workflow vs. Quixel is night and day. Not to mention the speed an stability. I'm never looking back. Sorry Quixel, you were good to me.

This is just a test WIP to familiarize myself with the interface. It's no where near acceptable finished work. So take it with a grain of salt. Rendered in Marmoset. But I actually like it more in Substance's Iray renderer.

Productivity tips from a serial procrastinator

This is mostly for myself. It's what I wish someone had said to me when I was a beginner. I'm a procrastinator and I respond to tough love and brutal truth. If you're like me, maybe this will help. If not, that's fine. Thanks for stopping by anyway.

THERE'S NO SUCH THING AS FREE TIME

"I go to work, then school, then I go to bed. How am I supposed to get free time if you keep telling me to work on my craft on nights and weekends?"

The answer is, you're not. There's no such thing as free time, there's only time. (I don't remember who said that and it doesn't matter.)

Look, there are only so many hours in a day. There isn't enough time in your life to do everything you want to do. You're going to have to give something up. Everything you do is a sacrifice of something else. Obviously you have to pay the bills, maintain relationships, eat, sleep and exercise. After all of that, you don't have time to watch the new season of 'Orange is the New Black' and work on your demoreel. So which are you going to give up? (Keep reading for why you shouldn't do both at the same time.)

BUSYNESS IS NOT PROGRESS

Ok so maybe you're one of those people that doesn't have a motivation problem. You live and breathe this stuff. You've sold your XBox, cancelled your Netflix, and your friends haven't seen you in a month. (Good, all they ever do is get drunk and talk about how drunk they were the last time they got drunk. You don't need them.) So why aren't you making any progress?

Well, the question remains, how are you spending your time? Are you constantly starting projects and never finishing them? Are you just practicing online tutorials and doing abstract exercises without a specific goal in mind? That's better than watching 'Breaking Bad' for the 4th time (guilty), but it won't help you progress. Sometimes that abstract exercise leads to inspiration for a broader project. But having goals, and seeing them through to the end is the best way to learn, and the best way to show off what you've learned to other artists.

Come up with a character, or a prop, or an environment, or whatever it is you want to create. Make sure it's beyond your current skill level, and then...just start. Begin modeling. When you get to the steps that you don't understand, ask YouTube for help. And then keep going until the project is done. Don't stop when the project drifts slightly off of your original concept. Don't stop when it falls short of your standards, because it will. Everything you create will fall short of your standards. But your standards will rise and so will your work. Your work will never catch up, and that's ok.

IT'S OK THAT YOU SUCK

THERE ARE NO SECRETS

The good and the bad news is that there are no secrets to becoming an expert at something. It's good news because it's simple, you just have to do it. The bad news is that it's hard. Simple but hard, that's the truth of it. You are in control of your life. Doing what you want to be able to do is as simple, and as hard, as giving up everything that gets in the way.

It's not about motivation, it's about discipline. If the artists you admire only worked when they felt motivation, they wouldn't be artists you admire. You wouldn't even know their names. So forget trying to find that perfect inspirational playlist to get yourself pumped. Forget watching Netflix on your second monitor while you work to keep your mind occupied. That second monitor is for references, and your mind should be occupied with your work. Motivation is a trap. Forget about it. Just sculpt. Just paint. Just draw. Just write. Just don't sit on your ass and consume. Anything but that.

IF YOU MUST PROCRASTINATE, DO IT WELL

I'm a procrastinator. It's how I am and that will never change. I will always get satisfaction from not doing what I know I should be doing. The key is to first avoid the pitfalls of procrastination. And secondly, allow yourself to do it in a way that's still productive. An example of avoiding the pitfalls, in my life, is to not have anything visual on the side while I work. Don't have a movie or a show on your other screen because you'll just end up watching that. If need be, don't work in the same place that you play. I find it very hard to work at home, even if I set myself up in a dedicated work area. There are too many distractions. And while I COULD browse Reddit or watch Netflix at my actual job, I find that being there changes my mindset into work mode. So find a place to work that isn't your house or apartment, if you can. Otherwise dedicate a room solely to working. Smudge it with sage if you have to. Make a sacrifice and consecrate the space to the Dark Gods of Getting-Shit-Done, and never profane your holy temple with Hulu, Steam Summer Sale, or other blasphemies.

An example of procrastinating well, if you must procrastinate, is to do something related to your project.  Get up and plan the next phase. Write, sketch, or go for a walk and think. Take screenshots of your work and send it to other artists you respect and get feedback. Watch a tutorial. Maybe work on a side project (but don't have more than 2 going at a time or you might fall into the trap of always starting and never finishing.)

Don't waste hours trying to create the perfect inspirational playlist. Do that before you sit down to be creative. My go-to background entertainment it The Collective Podcast by Ash Thorp, an artist I really admire. But probably the best thing to do is have a few pre-picked stations on Pandora and just take the responsibility out of your hands entirely.

You have these artists that you look up to online and you don't think you can ever be like them. You can. They were like you, once. They're not special, they just put in the work. It's that simple. You can do that. There is nothing external holding you back from becoming the artist that you want to be. There is no trick to achieving what you want to achieve, you just have to stop doing everything else.

These are the sketches I made this week.

I won an Emmy!

A short film I worked on called 'Daisy Belle'  won 5 Emmys! One of which was for my work on the animation. It was just the regionals so the next step is to move on to the big leagues. I'm honored to receive the award and excited to see if we move on! 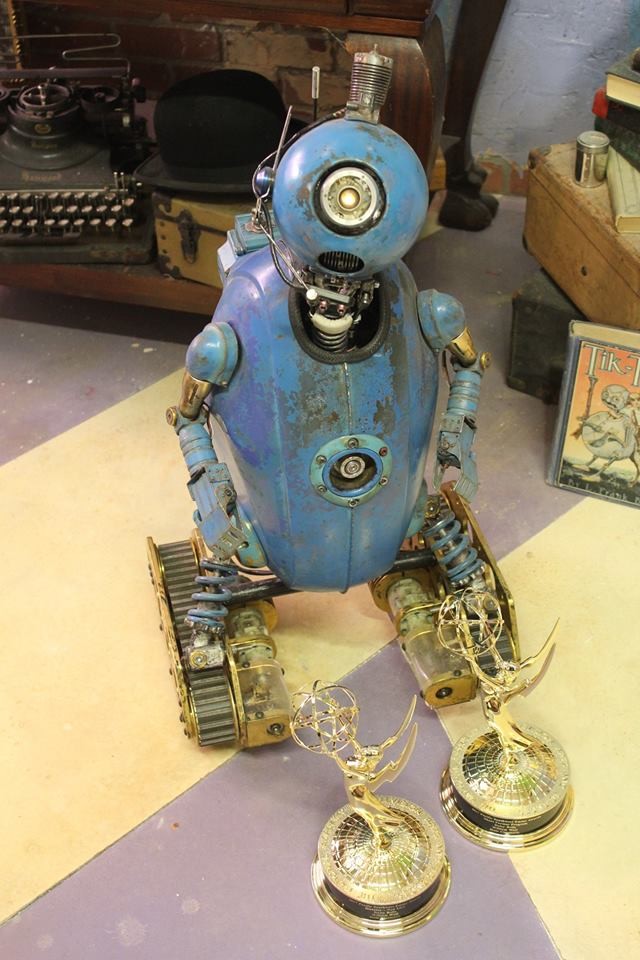 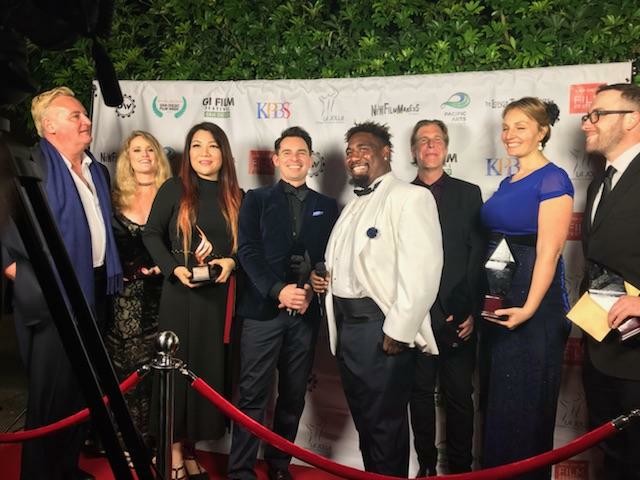 'Daisy Belle', a little short film I worked on last year won 5 awards at San Diego Film Week. Best VFX (That's me on the right), Best Production Design (the girl in blue is the best artist I know), Best Musical Score (The guy next to her is a musical wizard), Best Editing (The guy in the velvet jacket is genius...a weird genius), and lastly we won the big award. Best Narrative Short Film!

Next up, the Emmy's in May!

Should I make a Warhammer 40k fan film?

It seems like everyone has a 40k fan film these days. And I've got a few assets I've made in my free time from that universe. I'm considering taking the plunge.

Here's a quick creature sculpt as an example to my students on how to work with ZSpheres. It's pretty under developed so I don't want to post it in my main gallery. I had so much fun sculpting it that I think I may go back and finish him some day soon.